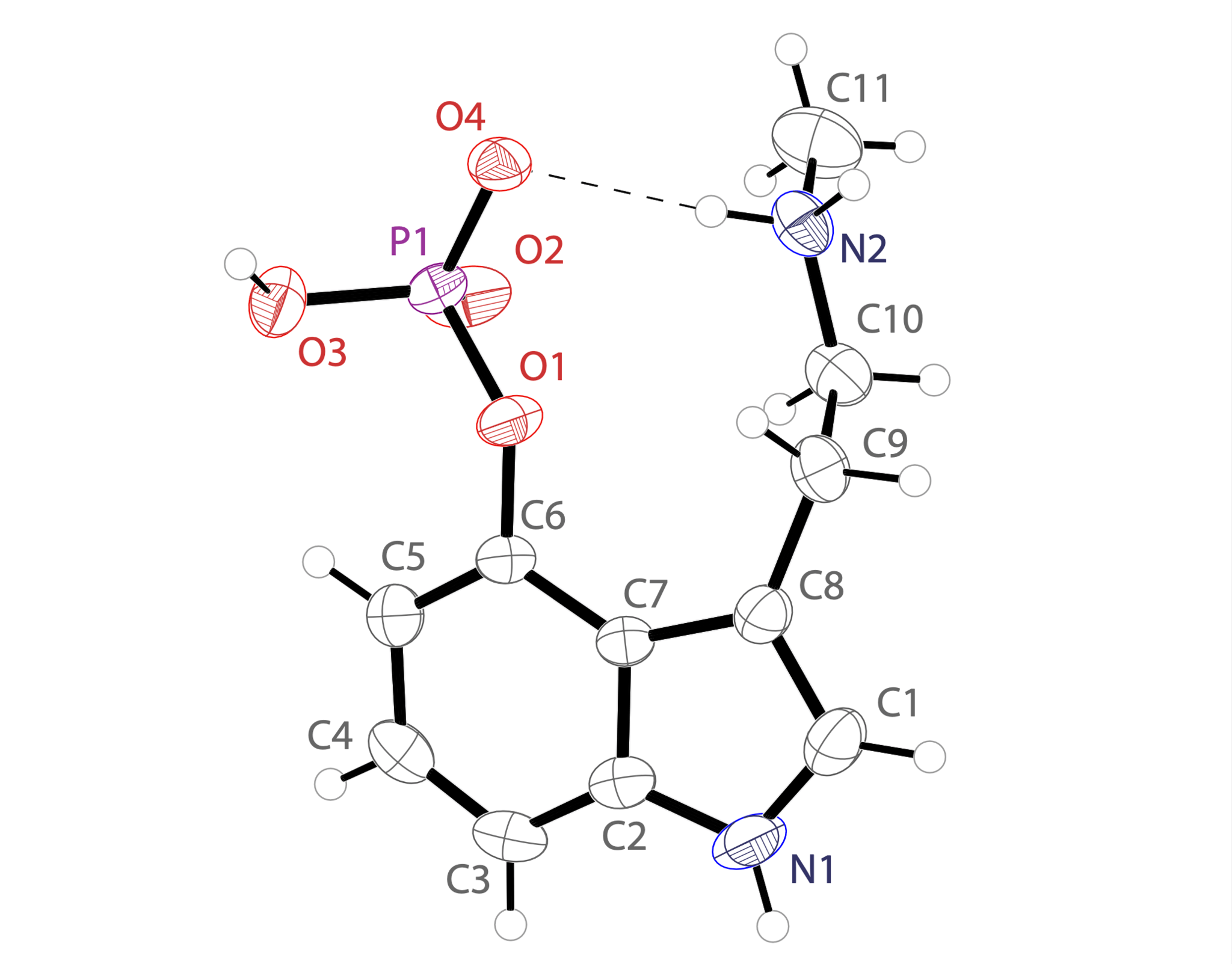 While psilocybin continues to receive attention as the active ingredient in magic mushrooms, CaaMTech scientists have continued filling the unmet need for fundamental scientific understanding of the “other” alkaloids.  In collaboration with the Manke Lab at the University of Massachusetts Dartmouth, CaaMTech published “The crystal structure of baeocystin” in Acta Crystallographica Section E. The paper reports the crystal structure of the compound baeocystin, an understudied naturally-occurring tryptamine present in most psilocybin magic mushrooms, for the very first time.

Psilocybin, a chemical compound found in psychedelic magic mushrooms, has received a tremendous amount of attention for its potential to treat numerous intractable health conditions. So much so that “psilocybin” and “magic mushrooms” have often and incorrectly been referred to interchangeably.  Psilocybin belongs to a class of compounds known as tryptamines, which closely resemble the neurotransmitter serotonin (5-hydroxytryptamine or 5-HT).  This structural similarity allows psilocybin to fit into and agonize serotonin receptors including the 5-HT2A receptor subtype responsible for elucidating psychedelic experiences.  But psilocybin is not the only tryptamine present in magic mushrooms.

Baeocystin, a zwitterionic alkaloid and analog of psilocybin, is another tryptamine that naturally occurs in most psilocybin mushrooms.  Baeocystin was first synthesized in 1959 and was isolated from the mushroom Psilocybe baeocystis in 1967. Still, relatively little is known about  baeocystin and little scientific research has been conducted due to a lack of access to pure, well-characterized material.  As co-author Alexander Sherwood wrote in a 2020 Journal of Natural Products paper, “…few studies have been conducted to evaluate pharmacological activity of these tryptamines, largely due to lack of availability of the compounds.”

“It is always exciting to solve the structure of a natural product,” said Dr. David R. Manke, Professor at UMass Dartmouth. “and even more so when it is one that has such great potential as a therapeutic.”

In an appearance on the Joe Rogan Podcast, famed mycologist Paul Stamets reported consuming pure baeocystin in the presence of a physician and further reported no psychedelic experience.  “I was ready for liftoff. I was hoping for liftoff, I know what liftoff feels like, and I didn’t get it,” said Stamets of the experience.  Baeocystin’s hydrolysis product and metabolite norpsilocin – which CaaMTech previously crystallographically characterized – was shown by Dr. Sherwood to be a full agonist of the 5-HT2A receptor but does not induce a head twitch response (HTR) in mice.

By solving the crystal structure of baeocystin, CaaMTech scientists have completed fundamental research required to understand baeocystin’s effects. Further determination of the biological effects of baeocystin and its metabolites could provide researchers with key findings necessary to better understand the role of the psychedelic experience in therapeutic benefit and whether non-psychedelic tryptamines may offer unique benefits of their own.

“CaaMTech continues to fill the unmet need for chemical precision when studying compositions such as magic mushrooms,” said Dr. Andrew Chadeayne, CEO of CaaMTech. “We are grateful to work with dedicated scientists Dr. Sherwood and Dr. Manke in filling the unmet need for pure, well-characterized compounds.”