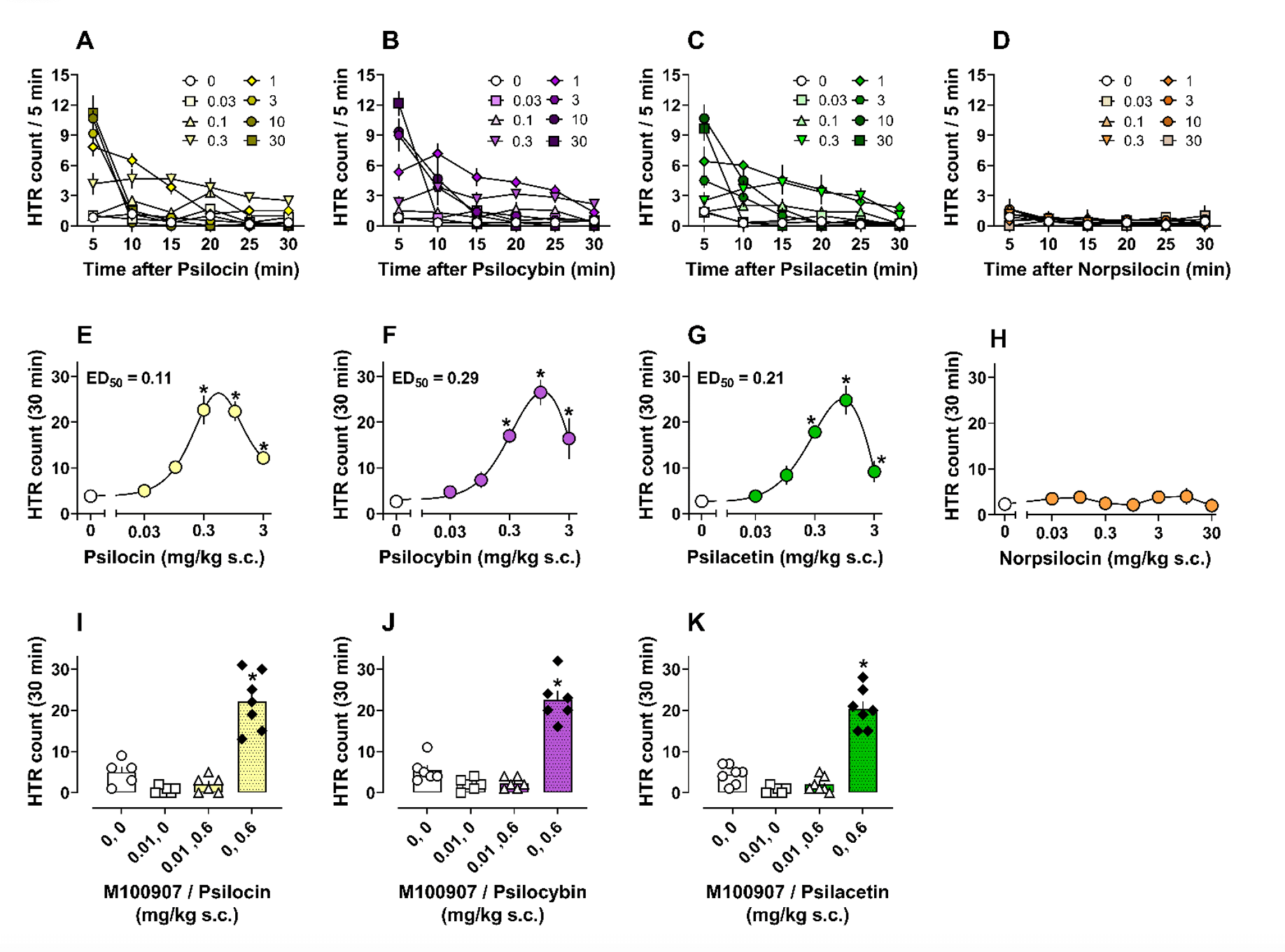 A new study comparing the pharmacology of naturally occurring and synthetic psilocybin analogues led by scientists at the Designer Drug Research Unit in the Intramural Research Program of the National Institute on Drug Abuse (part of the National Institutes of Health), Ghent University, the Usona Institute, the University of Wyoming, and the Manke Lab at UMass Dartmouth in collaboration with CaaMTech, was recently published. “Structure–Activity Relationships for Psilocybin, Baeocystin, Aeruginascin, and Related Analogues to Produce Pharmacological Effects in Mice” was published in the American Chemical Society’s journal, ACS Pharmacology & Translational Science. The study was the first comprehensive receptor binding screen comparing the effects of psilocybin, baeocystin, aeruginascin, their active metabolites, and synthetic analogues in radioligand binding assays and functional assays. The team also conducted in vivo studies comparing the properties of these tryptamines across head twitch response (HTR), locomotor, and temperature depression assays. These results led to multiple key findings, advancing the scientific community’s understanding about how “minor” tryptamines in psychedelic magic mushrooms may contribute to psychedelic effects or therapeutic potential. The work also highlights why psilacetin (4-acetoxy-N,N-dimethyltryptamine or 4-AcO-DMT), a popular gray-market recreational drug, is being studied as an improved alternative to psilocybin as a psilocin prodrug. Psilocybin, which is metabolized into psilocin in the body, is being investigated in clinical trials as a therapeutic for the treatment of substance use disorders, depression, cluster headaches, and various other psychiatric disorders. For treating severe depression, psilocybin in conjunction with psychotherapy has received “Breakthrough Therapy” designation from the FDA, but has not been approved by the FDA for the treatment of any medical condition and remains a DEA Schedule I controlled substance.

While psilocybin has garnered the overwhelming majority of attention as “the active ingredient” in magic mushrooms, other structurally similar tryptamine compounds – which are naturally present in these mushrooms – have largely been ignored as “minor” and unimportant. Characterizing these compounds and comparing them to psilocybin is critical to understanding their role in the psychedelic effects of magic mushrooms and their potential as therapeutics.  The authors of the study collaborated to perform comprehensive in vitro screens to identify potential biological targets, to asses functional activity at several receptors, and to conduct in vivo HTR assays directly comparing naturally occurring tryptamines, active metabolites, and their synthetic analogs.

The research produced several interesting results pertaining to the structure-activity relationships (SARs) of the studied compounds, the potential roles of the “minor” alkaloids in the psychedelic experience occasioned by magic mushrooms, and the potential for psilacetin (a synthetic psilocin prodrug) to be studied as an improved pharmacological alternative to psilocybin.  The SAR findings reported in the paper show that “the degree of N-methylation and 4-position ring substitution can powerfully influence pharmacological effects of psilocybin analogues.”  The ability of compounds to induce robust HTR in rodents has been used as a preclinical predictor of potential psychedelic-like activity.  Data from the HTR studies indicated that baeocystin and aeruginascin, two naturally occurring magic mushroom tryptamines, do not produce an HTR in mice, indicating that they may not induce psychedelic-like effects in humans on their own.

Notably, psilacetin, a synthetic psilocybin analog, was found to be more potent than psilocybin in mouse studies. While this result highlights psilacetin’s potential for use as a psilocybin alternative, the authors were careful to qualify their findings by noting that psilacetin “displays its own serotonergic receptor activities” in cellular assays.  The authors concluded that “future studies should directly test the hypothesis that psilacetin is hydrolyzed to psilocin in vivo.”

“It’s an honor to collaborate with the leading scientists in their respective fields to bridge the knowledge gap between psilocybin and these other important compounds,” said Dr. Andrew Chadeayne, CaaMTech CEO. “We’re drawing closer to a comprehensive understanding of how these compounds act pharmacologically and their potential to be studied as potential treatments for some of the world’s most challenging health conditions.”